Carmen Amor, is a flamenco singer appearing on stage for over twenty years, in Spain and abroad. She is from Seville but currently lives in Italy, often traveling for performances.

She regularly performs recitals of cante flamenco, with guitar accompaniment and sometimes hands clapping (“compás”) or drums; other times, she collaborates to the realization of various shows with several dance companies and productions.

She has received awards in flamenco singing competitions held in various localities in Andalusia, such as:

Her natural curiosity leads her to experiment with other types of music, adapting her voice in several flamenco musical contexts, among which worth mentioning is her participation in the CD “Paolo Conte Live Arena di Verona”, eponymous Italian singer-songwriter, and fusion of some shows, like a series of concerts with the Austrian group of ethnic music “Comin’& Goin’” in 2005, and the encounter between Indian dance Kathak and Flamenco at the Teatro Mancinelli of Orvieto in 2006.

Carmen Amor continues her research and study of flamenco, building on her education (a degree in Philology and a Diploma of Advanced Studies for a doctorate at the University of Seville). She has held internships and lectures – which often shows with her singing – at various institutions, such as the University Pablo de Olavide in Seville and the Cervantes Institute in Milan, as well as in many centers and private schools. She also published several articles on topics related to flamenco.

In 2015 she was invited to perform with the artist Hiwa K at the event “A Few Notes from an Extellectual”, during the closing ceremony of the Symposium “60 years of dOCUMENTA”, within dOCUMENTA (Kassel, Germany), the most prestigious international exhibition of contemporary art.

He reconciles his artistic career with the research and study of flamenco. In this sense , he writes publications and lectures and internships in locations such as the Cervantes Institute in Milan , or the University Pablo de Olavide of Seville, among others .

In 2012 she obtained a Diploma de Estudios Avanzados (M. Phil.) in a PhD program on Flamenco at the University of Seville and is currently preparing the doctoral thesis. 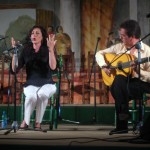 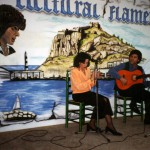 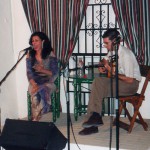